Welcome mat out for bluebirds at the golf course 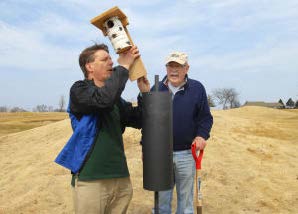 BLOOMINGTON — While golfers  putted on a nearby green, Frank Zimmerman and Guy Fraker had birdies of a different kind on their minds.

“I used to caddy before, but never bird boxes,” said retired attorney Guy Fraker as he carried
supplies to Zimmerman to install the first of 10 special birdhouses at Prairie Vista Golf Course
last week.

Fraker got the idea after buying a house at Prairie Vista. “The beauty of a golf course in today’s disappearing habitat is that the golf course offers an opportunity to create wildlife habitat,” Fraker said.

Zimmerman, a minister and amateur ecologist, explained that the open space, mowed grass, trees for perching and ponds of water on golf courses mimic a savannah, which is prime bluebird habitat.

While the goal is to attract bluebirds, other small, native species, such as house wrens, tree swallows and chickadees also might use the boxes.

However, house sparrows — an abundant, nonnative species — are not welcome and will be “evicted” if they try to nest. Their aggressiveness in taking over nesting spaces is one of the threats to bluebirds, Zimmerman said.

Although they are commonly referred to as “boxes,” the project at Prairie Vista is using what is called the Gilbertson PVC pipe design. The “boxes” are painted to resemble birch trees and are “the most house sparrowresistant nesting box,” Zimmerman said.

“This started as a whim of mine,” Fraker said. When he asked his neighbors if they would like to donate to such a project, more than $1,000 was raised. “The golf course means a lot to us living here,” Fraker said.

Fraker said his idea received “a fantastic response” from golf course personnel, too. Nancy Nelson, operations manager for Bloomington’s three courses, admits she didn’t know a lot about bluebirds when she was approached about the project, but said, “I was all for it.” Since that first meeting, Nelson said, she’s learned a lot.

Welcome mat out for bluebirds at golf course

“Golf courses are more than just a golf course,” Nelson said, citing such winter uses as sledding at Highland Golf Course and skiing.

“Golfers like nature. They’ll see the boxes and appreciate it,” she said.

Local conservation groups also contributed to the project, but most of the money came from neighbors, who also will monitor the boxes.

Monitoring includes removing the nests of unwanted sparrows. Information about which birds nest, how many eggs they lay and how many birds are fledged — learn to fly — will be reported to the East Central Illinois Bluebird Society, Zimmerman said.

He already maintains bluebird trails for the ParkLands Foundation at its Merwin Preserve and Chinquapin Bluffs property.

Over the years, more than 100 bluebirds have fledged from those boxes.

Zimmerman is hopeful bluebirds will find and use Prairie Vista boxes, but there’s no way to know which birds will nest. “That’s part of the excitement,” he said.